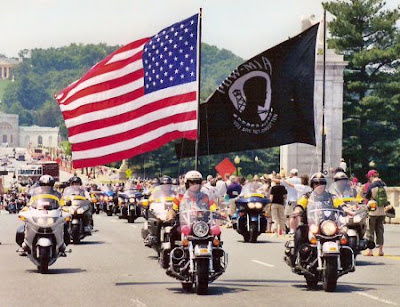 Live POWs - what is our government doing about the live POWs left behind in all past and present wars? Why are government efforts focused only on recovering remains? Why has the government ignored its own documentation or changed creditable reports into discredited reports. It is impossible that every piece of intelligence that concerns a live unreturned POW is wrong. For the families of those still unaccounted for, there will never be closure.

House Res. 111 – why has Speaker of the House Nancy Pelosi refused to allow this resolution to come to the floor for a vote? This bill had 289 co-sponsors in the 110th congress and has 248 in the 111th congress. Bills have come to the floor with less than half-dozen co-sponsors yet ours remains blocked by Nancy Pelosi. When you read the text of the proposed bill, it is difficult to understand why there is opposition: “Resolved: that there is established in the House of Representatives a select committee to be known as the Select Committee on POW and MIA Affairs…The select committee shall conduct a full investigation of all unresolved matters relating to any United States personnel unaccounted for from the World War II, Cold War Missions, the Korean conflict, Vietnam Conflict, Persian Gulf War, Operation Iraqi Freedom, or Operation Enduring Freedom, including MIA's and POW's missing and captured.”

Veterans benefits – the economic recovery and healthcare reform have taken center stage, yet there are still serious problems with the VA system, particularly in the areas of speedy transition of service personnel after discharge, claims processing, and geographic inequities in VA facilities. While we applaud VA Secretary Shinseki’s efforts—and we believe him to be a true advocate—we believe there is more that could be done. This includes more public communication about VA programs such as the new Emergency Care Fairness Act of 2009 and the Special Pension for Veterans’ Aid and Attendance. Many veterans and their families have no idea these benefits are available to them; an estimated $22 billion annually goes unclaimed.

Joe Carson is a nuclear safety engineer at the U.S. Department of Energy. He is a decorated veteran who served as an officer in the nuclear navy for six years and later worked at several commercial nuclear power plants. He worked at the Oak Ridge nuclear facility in Knoxville Tennessee.

In 1994, Carson was appointed head of a board to investigate a fire at the Brookhaven National Laboratory in Upton, New York. The fire occurred in connection with the Terrific Reactor Isotope Separator To Analyze Nuclides (TRISTAN) experiment, which was being conducted by a private contractor at Brookhaven, under DOE’s supervision.

Carson alleged that DOE officials had permitted the contractor at Brookhaven to operate the TRISTAN experiment for more than ten years in non-compliance with a series of DOE safety orders and procedures. Had the procedures been followed, he alleged, the experiment would have been shut down because of the dangerous energies and substances, high voltage and high level radioactive waste being used in a confined area with inadequate containment.

Investigations by an outside agency confirmed Mr. Carson’s allegation that DOE had not conducted comprehensive safety reviews of the TRISTAN experiment and that a number of management inadequacies contributed to the failure to conduct safety reviews of TRISTAN commensurate with its hazards. The investigations implicated DOE in cases s of injury and sickness of DOE employees, put in harms way by inadequate safety practices.

As a result, Congress passed a law in 2000, the Energy Employee Occupational Illness Compensation Plan Act (EEOICPA), to provide a measure of compensation and health care to thousands of diseased, disabled, or prematurely deceased DOE workers or their survivors. President Clinton, in signing this legislation, apologized to these workers for their being put in harms’ way in DOE facilities, without their knowledge or adequate protection. About 70,000 claims have been filed under the EEOICPA and thousands of claims have been paid.

As for Carson, DOE responded by relieving Carson of his oversight and investigative duties, tranferring him to a series of clerical and make-work jobs, eventually "promoting" him to a low level clerical job preparing training materials. At the same time, they opened an investigation into alleged problems with his competence, and accusing him of being a disgruntled employee. And of course, they began the process of revoking his security clearance.

Carson appealed to the Merit Systems Protection Board, which ordered DOE to give Carson back his job. DOE abolished the job,and Oak Ridge did not offer him a different job (though some were available). Carson was offered a choice of taking a job in the Washington area (moving his family from Oak Ridge to Washington) or finding work outside the agency. He chose to move to Washington.

Eventually, he appealed again to the MSPB, and again, he "won." DOE was ordered to give him a good job, and to pay him 260,000 for his legal fees. To date, despite several subsequent "victories" including an additional 120,000 in legal fees, DOE has yet to comply.

In April of 2003, Carson appealed to the Office of Special Counsel to investigate DOE's failure to comply with the MSPB orders, and to oblige their compliance. OSC failed to do so alleging (incorrectly) that it did not have the authority to do so. In essence, the legally mandated "enforcer" of MSPB's decisions was refusing to carry out its responsibilities. In the course of seeking justice in his own case, Carson discovered that, in the 31 years of its exitence, the OSC has repeatedly refused to take on high-profile investigations, effectively allowing agencies to carry out prohibited personel practices even after those practices were shown to be illegal.

As a result, Carson expanded his struggle for justice, to attempt to oblige the OSC to comply with its own mandate. That is the case that is now entering the Supreme Court.

"The OSC has repeatedly refused to investigate allegations of federal employees harmed by agency violations of agency directives for personnel matters as work force discipline, grievances, performance evaluations, personnel security clearances, etc, basing its refusal on the idea that there is no "civil service rule" prohibiting such reprisals. This has continued despite the fact that the Supreme Court has ruled the contrary, that agency work force discipline directives are “rules” per 5 U.S.C. §7703(c)(2) - see Doyle, v. VA, 229 S.Ct. Cl. 261 (1982).

As a result, agencies are allowed free reign to use such means, particularly biased performance evaluations and security clearance revocations, as reprisals against whistleblowers and internal policy dissenters.

To obscure this failure, OSC has claimed that the reporting requirements of 5 U.S.C. §1214(e) do not apply to the selected laws, rules, or regulations it considers to be under its jurisdiction. The result is that OSC obstructs justice by not formally reporting to the involved agency head, as §1214(e) explicitly requires, its nondiscretionary investigatory determinations, “there is reasonable cause to believe” such a violation occurred, thereby creating a permanent, publicly available record of OSC’s report and the agency-head certified response, per 5 U.S.C. §1219(a)(3)."

CFSO notes that DOE has a long history of non-compliance with court decisions and those of appeal boards, as well as a history of cheating in security clearance matters. In one recent case, a DOE employee was denied access to allegations against him, violating his legal right to review and respond to those allegations.

For this reason and others, Joe Carson has been a supporter of CFSO. Now it is our turn to help him.

We urge CFSO members and readers of this blog to go to the National Whistleblowers Center website and sign on to the amicus currae brief supporting Joe's case.
Posted by Steve at 6:30 PM No comments: