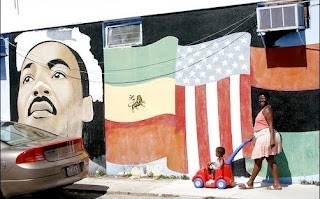 "The time has come for an all-out world war against poverty. The rich nations must use their vast resources of wealth to develop the underdeveloped, school the unschooled, and feed the unfed. Ultimately a great nation is a compassionate nation. No individual or nation can be great if it does not have a concern for "the least of these". Deeply etched in the fiber of our religious tradition is the conviction that men are made in the image of God and that they are souls of infinite metaphysical value, the heirs of a legacy of dignity and worth. If we feel this as a profound moral fact, we cannot be content to see men hungry, to see men victimized with starvation and ill health when we have the means to help them. The wealthy nations must go all out to bridge the gulf between the rich minority and the poor majority."

FSJ: State Clearance Decisions Arbitrary? No Doubt About It!

The department responded with the briefest of notes, asserting that it followed governmentwide guidelines for adjudication.

AFSA disagreed and wrote again in 2007, noting, among other things, that unlike the Office of Personnel Management and the Department of Defense, which collectively adjudicate more that 94 percent of U.S. government security clearance cases, the department applies no standard of evidence to the derogatory information used as a basis for clearance suspensions and revocations.

The department responded in 2008 that Executive Order 12968 did not establish a specific standard of evidence and, in essence, that the laws were vague and subject to interpretation.

In both responses, the department asserted that “all doubt” in a security clearance matter must be resolved in favor of national security.

It is rare that a dispute with management takes so long to resolve, but AFSA is again pursuing this issue. The executive order is indeed vague, but it is crystal-clear on three points: information used as the basis for a security clearance action must be reliable; the adjudicative process must involve a “whole person” review; and security clearance decisions must involve an investigation conducted for that purpose.

AFSA feels that since the law is vague, and since the department’s share of adjudications is a tiny portion of the whole government’s, it is reasonable for the department to follow the interpretation used by the vast majority.

In the 94 percent of security clearance cases adjudicated by OPM and DOD, the “reliability” of derogatory information is subject to a standard of “substantial evidence.” That is not the highest evidentiary standard — in fact, it is a very low standard — but it is one that benefits the vast majority of cleared government employees. Yet it is denied to the 1 percent or so of employees whose cases are decided by the Bureau of Diplomatic Security.

That standard does not come from the executive order. It derives from decisions by the U.S. Supreme Court and those of the Defense Office of Hearings and Appeals, which provide most of the case-law precedents used by the security clearance community as a way of avoiding arbitrary and capricious determinations contrary to law.

The dictionary defines “arbitrary” as “based on or determined by individual preference or convenience rather than by the intrinsic nature of something.” In other words, an arbitrary decision is one made in the absence of an objective standard.

Absent an evidentiary standard, the current adjudicative procedures used by the department are, by definition, arbitrary.

With reference to the concept that all doubt must be resolved in favor of national security, that is also very different for 94 percent of cleared government employees than it is for those employed by State.

Here again, OPM and DOD apply a Supreme Court- and DOHA-supported definition, in which the word “doubt” is defined as “reliable, relevant, derogatory information that is not mitigated by other information either supplied by the subject or otherwise available.” By that definition, if one cannot determine the reliability of information, one cannot have the kind of legally-defined doubt that should form the basis of a security clearance determination.

AFSA does not ask that State Department employees be treated more leniently than anyone else.

Moreover, we feel that given a mandated governmentwide trend toward interagency standardization and reciprocity of clearances, State should not continue to forge its own interpretations of law, but should join other agencies of government by accepting the standards used in the vast majority of security clearance adjudications.

This includes not only the standard of evidence mentioned above, but also written procedures documenting a whole-person review, and clear and rebuttable statements of reasons for denial of a clearance.

Let doubt be resolved in favor of national security, by all means. But let that doubt, and all decisions related to it, be based on the same evidentiary standard that protects 94 percent of cleared government employees from arbitrary
decisions and abuse.
Posted by Steve at 7:15 PM 1 comment: